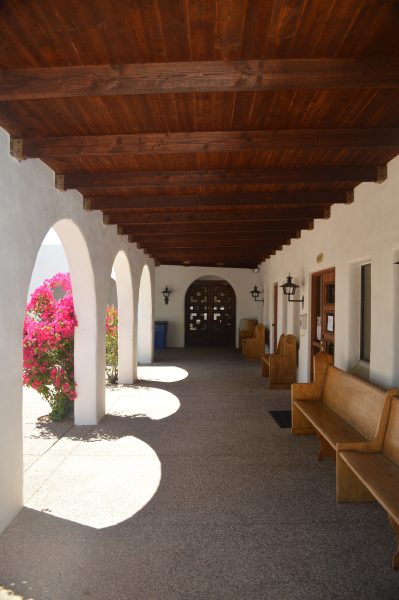 In 1964, Christ the King was started as a chapel of St. Philips in the Hills under the guidance of its rector, Father George Ferguson. The term “chapel” denotes a branch of the mother church, as opposed to a “mission,” which could become a self-supporting congregation. In the beginning, worship services were held at Harelson Elementary School on West Chapala Drive.

However, that same year, ten acres of land on Ina Road were donated by a parishioner, Mrs. Raymond Fowler. In 1965, construction was begun on the two story, Phase I building, which included a chapel, a sacristy, a combination library and common room, and several classrooms. The architect, Gordon Luepke, drew up a magnificent master plan for a future expansion of the facilities.

In 1965, Father Ferguson announced the appointment of St. Philip’s staff member, Father Tom Leonard, as the “Rector’s Vicar.” Services began on September 12 in a nearly-finished building with a temporary organ and no pews. The Chapel of Christ the King, with its beautifully carved altar and a sculpture of the Rising Christ behind it, was formally opened and dedicated on November 29, 1965. Father Leonard worked hard to encourage the congregation to be more faithful to the chapel, and he was successful in instilling the need to tithe to secure the future of Christ the King.

Father Ferguson died in 1968 and was succeeded at St. Philip’s by Joseph Heistand. In response to inquiries from Christ the King, he declared it inevitable that the chapel would seek to become an independent parish. This led to a fundraising effort, begun in 1971, to reimburse St. Philips for about half of the original cost of establishing the chapel. The initial installment of the reimbursement, $125,000, would be used to establish St. Albans on the east side of Tucson. Through the faithfulness and generosity of the parishioners, the entire amount was paid in early 1974.

The Diocesan Convention voted in November to accept Christ the King as a self-supporting parish. Father Leonard became the Rector. Northwest Tucson was growing rapidly and the area included many young families with children. In 1975, Father Leonard recommended to the Vestry that they hire a priest recently received from the Roman Catholic Church, Father Gregory Wyes. Two years later, after Father Leonard’s resignation, Father Wyes was appointed Priest-In-Charge. After an extensive search, he was named Rector.

Father Wyes served as the only full-time priest until 1982, at which time Father David Roseberry joined the staff as Assistant Rector and Youth Minister. Services were held at 8 a.m. and 10 a.m., but the 10 a.m. family service grew rapidly and was subsequently moved to 9:30 to allow for the addition of an 11 a.m. choral Eucharist. Father Wyes oversaw significant additions to the church and grounds. A Memorial Garden for cremains, an office wing, and a courtyard were added to the east, along with a domed bell tower. The old offices were demolished to make room for an expanded library and a choir room. Paved parking areas were added and a recreation ramada was built. A land swap traded four acres to the west for over six acres to the north, preserving the pristine northern exposure of desert and mountains seen from the picture windows in the nave.

In 1984, Father Roseberry was called to a parish in Texas. Although attendance at Christ the King declined for a while, the congregation remained faithful and strong. Father Wyes hired a Director of Christian Education, who later applied for Holy Orders and left for seminary. Father Wyes empowered the congregation with responsibility for almost all of the new parish’s programs (with the exception of those relating to the pulpit, worship and hospital visitation). Since that time, baptized members have worked continuously in nearly fifty ministries, giving life to the church and its missions.

The services, especially the family Eucharist, filled the church to capacity. In 1996, a capital campaign was launched to double the size of the nave and the Sunday School facilities. With $765,000 in cash or pledges, construction was started in March of 1997. The million dollar project was completed in January 1998; the debt was retired 2 years later. In 2001, Jeanine Harber was hired as Youth Minister and worked primarily with our middle and high school students. Ms. Harber served until 2003.

In 2001, Christ the King invited the Northwest Interfaith Center, an inter-denominational social service agency, to move its office and food bank facility to the southwest corner of our property. The organization has since been re-named Interfaith Community Services (ICS) and now has more than 50 faith communities allied with its support services in a significantly expanded facility. We have renewed their lease ($1 per year) with each expansion and negotiated special provisions to accommodate the greatly expanded services and volunteer corps associated with the organization.

In the Spring of 2002, Father Wyes announced his intention to retire, and the Vestry appointed Father Bill Haugh as interim. Father Haugh had been a frequent guest preacher and had served as Priest-In-Charge when Father Wyes was on vacation. In addition, he had worked for nine years as an addictions counselor associated with the parish.

Father Haugh served until February 1, 2004, when Father Mike Smith was called to be our new rector. During Father Smith’s tenure, we moved forward on a number of fronts. We identified funding for and acquired the Aeolian-Skinner Opus 1192 pipe organ. Liturgically, we experimented with a once-a-month “God and U2” service with live music on Saturday evenings. The service attracted attention throughout the metropolitan area for a short time, but attendance faded and the service was discontinued. Another, longer-lasting addition was a Taize service. This continues monthly and has become quite meaningful to a small group of loyal attendees. Father Smith and the choir director also reinvigorated the Youth program. Unfortunately the choir director left Christ the King for a larger program within the Diocese, and the numbers again faded. Coinciding with the installation of the pipe organ, Father Smith consolidated leadership of the music program under a single organist/ choir director. Another excellent reorganization tactic was the assignment of vestry members as “links” to the various lay ministries, giving emphasis to the ministry of the laity and an opportunity for monthly reporting to the vestry about areas needing attention and support.

Father Smith served until November 2011, when he was replaced with a two-person team: Father Fred Masterman as interim rector and Reverend Nina Stasser as associate. These two wonderful priests had previously retired and served as associated clergy at Christ the King, then volunteered to serve for the next year in a non-stipendiary capacity, along with Father Joe Fitzgerald (who also served as a chaplain at University Medical Center). Father Masterman and Reverend Stasser extended their service for an additional year until Canon Jeff Bullock was called by the Vestry to serve as priest-in-charge. During his brief tenure, Father Bullock facilitated the expansion of the sanctuary and the installation of new carpet throughout the nave, outsourced most of the duties of the sexton, and initiated the preliminary work necessary to establish a parish endowment.

Father Bullock announced that he planned to marry in June, 2015 and retire from the priesthood. Happily, Father Masterman and Reverend Stasser agreed to resume their roles as interim priest-in-charge and associate interim priest-in-charge until the arrival of The Reverend Anita Slovak in 2016. Starting with Father Wyes and accelerating in recent years, lay members of our parish have increasingly accepted their calling as ministers of the church, and lay ministries now serve many areas, both internal and external.